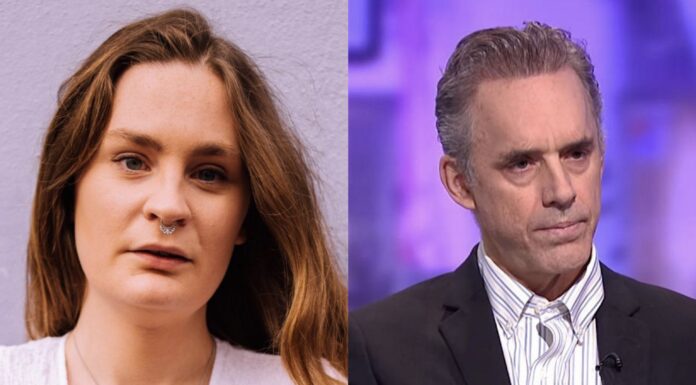 Ugla Stefanía Kristjönudóttir Jónsdóttir, or Owl Fisher in English, says that the psychologist Jordan Peterson, who did an interview on the news program Ísland í dag on Sunday, is spreading contradictory and dangerous information about trans youth issues that can cause harm to young people. Peterson’s comments about trans children and surgeries done on them evoked strong reactions from the trans community in Iceland.

„To be clear: Jordan Peterson has no expertise in trans issues. He has also not worked with trans youth, nor in health care for trans youth or trans people in general,“ says Owl Fisher, graduate from gender studies and activist for trans people, in a post she wrote on her Facebook page.

„What he has to say about this issue is contrary to the methods of experts and people who work with children in the field. He is literally spreading contradictory and dangerous information that can harm young people if taken seriously, “ says Ugla.

Canadian psychologist and lecturer Jordan Peterson spoke at Háskólabíó for a full house on Saturday night. The morning before his lecture, journalist Snorri Másson interviewed Peterson for the news program Ísland í dag on Channel 2. In the interview, Peterson initiated a discussion on transgender issues. Among other things, he claimed that healthcare professionals mutilate children by performing surgeries on them. He also said he wanted to ban surgeries on transgender children under the age of 18 and make them legally able to sue healthcare workers who perform such procedures.

After the interview with Peterson, Másson clarified that it is in fact very rare, globally, for the gender reassignment procedures he had referred to, to be done on individuals under the age of 18. According to Channel 2’s sources, no such operations have been performed on a person under the age of 18 in Iceland. He continued by saying that hormone-suppressors were known to be sometimes used to support transgender teens, but that such treatments with hormones are both well-known and tested over the years.

Jordan Peterson has long been considered controversial for many of his views and statements, for example when it comes to transgender issues.

„We as a society would never accept such a discourse if he were talking about homosexuality, and therefore we should not accept it when it comes to trans people either,“ says Fisher in an interview with Vísir. She also claims that the suppression of gender identity has caused trans people great harm over the years.

In her post on Facebook, she encourages people to show trans children and young people understanding and compassion.

„If you really care about the wellbeing of young people, then you should avoid this type of nonsense and face young people with care, understanding and compassion. People will not stop being queer if you do not believe or listen to them. However, they will stop trusting you and suppress who they are, which will in turn cause profound discomfort and problems, „says Fisher.

„Listen to your children and love them unconditionally. Do not let some prejudiced men convince you of anything else, no matter how many university degrees they may have. „

This article was originally published in Icelandic.