Rearview Mirror: When four people died in the slush floods in Patreksfjörður 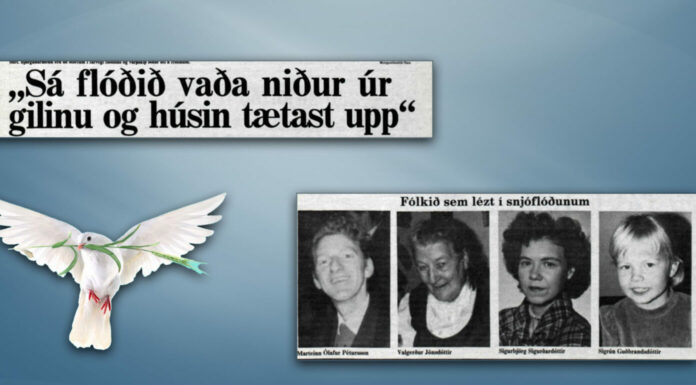 The Saturday of 22nd of January, 1983, was a fateful day in the lives of the people living in the town Patreksfjörður. The day started out as any other Saturday, except for the fact that there was to be a Þorrablót celebration in the evening. Þorrablót is an ancient Nordic tradition in celebration of the Nordic Gods, where people eat old, traditional Icelandic food and drink the local alcoholic beverage Brennivín.

Therefore, the people of Patreksfjörður were quite excited for the evening to come.

Heavy rain in the previous night

There had been an unusual amount of rain the night before and rescue groups were quite busy with shoveling snow from rooftops, draining water from basements that had leaked in the previous night, and clearing drainage holes.

At around ten in the morning the head of the Department of Civil Protection and Emergency Management, Guðjón Petersen, called the District Commissioner of Patreksfjörður, Stefán Skarphéðinsson, to tell him that the Icelandic Met Office had issued an avalanche warning for the area. The danger was high in Patreksfjörður, and therefore it was important to keep a close eye on the situation.

About a half an hour after the phone call between Guðjón and Stefán, an announcement and been sent to the main government TV and radio station, RÚV, warning the people of Patreksfjörður to be careful due to increased likelihood of an avalanche.

Children playing near the canyon

Later that day, the people had started to pay extra attention to the Geirseyrargil canyon, although there was not an estimated danger of an avalanche from the canyon. People working for the town were working hard to keep the route through the canyon as clear as possible.

Despite all the hard work that day, water had started to flood profusely into the town and through the streets. The main focus at that point became to keep all drainage holes open, so as to avoid damage of property.

A few children had gathered near the canyon, sliding together, and playing in the snow. When Pétur Sveinsson, the chief of police in the area, thought he noticed something strange about the canyon, he immediately went and gathered the children, and led them away from the area. One of the children was his own son. All the children went back to their own homes, except for one, that went home with Pétur and his son. That turned out to be a fateful decision, as that particular boy lived in one of the houses that ended up being hit by the flood.

„I saw the flood tearing down from the canyon“

Soon after Pétur arrived home with the two boys, they heard a loud bang. When they looked outside the living room window, they saw a 15-meter-high tsunami hitting two houses and then tearing onwards.

Shortly after that, huge water poles tore up through the air at the canyon’s entryway, followed by a large liquified avalanche, a slush flood, that was later described like a wall that only grew as it drew closer to the town. Shortly thereafter, another flood hit the town. Twenty houses were destroyed in the floods and four people lost their lives. 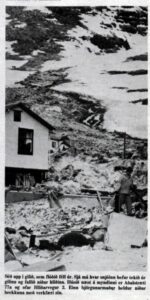 „I saw the flood tearing down from the canyon and the houses being shredded in the process. After that, I could only think about getting inside my house, to my fiancé, “ Helgi Páll Pálmason said to the newspaper Morgunblaðið shortly after the events. 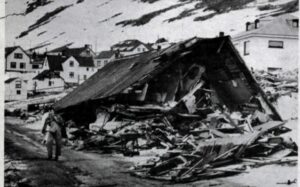 „You can never put a price on human life“

„I cannot, by any means, describe how I felt when I saw the flood erupt from the canyon, nor how long it took. I thought it must have been about four meters high – but I cannot be completely sure. The damage here is catastrophic. Even though worldly possessions have not been estimated yet, you can never put a price on human life. I want to deliver my gratitude to all those who helped us with the rescue operation. Without their help, it would not have been as successful, “ said Úlfar Thoroddsen, who saved himself by running from the flood. 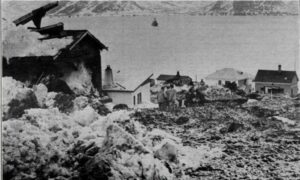 „When the first flood erupted, I was in the building Bræðraborg, by Litladalsá river, pumping water from a basement. Then, I heard men yelling about a flood erupting from the canyon. When I looked I saw the flood tearing down the hill and hitting the houses, “ said Haraldur Karlsson, the head of the Iceland Association for Search and Resque. He was one of the first to arrive at the scene.

The names of the people who lost their lives in the slush floods in Patreksfjörður in 1983 were:

This Rearview Mirror was originally written in Icelandic by Harpa Mjöll Reynisdóttir.